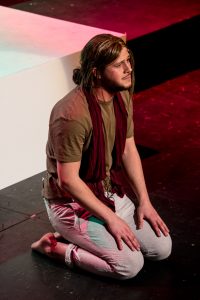 “Father I’m in anguish” from Risen! The Musical

Two weeks ago in response to the atrocities in Manchester and London I offered the words of two songs “Allow His Loving Arms” and “Oh Lord Hear My Voice.” Since then we have the awful event in Finsbury Park and the devastating fire in Grenfell Tower and it is only natural to ask the question “Why? and to ask that directly of God. In previous blogs I have tried to address the question of why does God allow suffering and it seems appropriate during these most difficult times to revisit a few key thoughts.

First, it is an imperfect world in which we live (the featured song for today expresses the same idea in slightly different words “This is not heaven.”)

Second for love to be genuine people have to have a choice whether or not to love – that is why God gave us a free will – to love and follow Him or not. Without a choice we would simply be robots. When given a choice some will make wrong ones, maybe even ones that could be deemed as evil as the case in Manchester and London. If the tragedy that is Grenfell Towers is found to have been caused by cutting corners on safety, born out of possible greed then that too could be deemed as evil- certainly the consequences of this disaster could demand such a verdict.

Third, it is possible to believe that God is good but that the world is often bad. Jesus lived in a world that was full of hate and persecution and He was eventually killed by people that through fear and bigotry decided His fate. Jesus suffered and so He understands how we feel when we suffer and He is, therefore perfectly placed to hold us in our grief. That is not meant to sound glib and I am not suggesting that singing a song to Him will make everything ok. No the pain of these recent horrific events is raw, as is the many ways in which we can suffer in this imperfect world. Having family and friends to show compassion, kindness, empathy and sympathy is wonderful, but the peace that comes from God is beyond understanding. We cannot avoid the storms of life and it is, I believe wrong to try and pretend they do not exist- no we need to walk through the storms and hopefully come out the other side stronger. In walking through life’s storms it is good to know that God walks with us and is there to comfort and support us – we just need to choose to believe that truth and call on His help.

Anger and revenge are understandable emotions during times like these and I believe it is ok to be angry with God – He is big enough to take it and indeed the Psalmists often displayed anger and bewilderment through their Laments – but more of that next week.