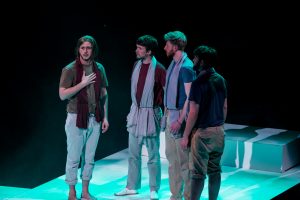 “My soul is overwhelmed with sorrow” from Risen!- The Musical


“Out of the Depths” featuring Chloe Brokenshire as Mary Magdalene from the album Risen!The Musical recorded and produced by Joffy Girling

It was sometime in 2000 that I was returning from a Partners Day at Waverley Abbey House in Farnham, which is the centre for the “Crusade for World Revival” (CWR) the publishers of Selwyn Hughes’ “Every Day with Jesus.” As I was driving car an up-tempo tune came into my head that I knew was very melodic (he says humbly!) Sometimes God gives me melodies and lyrics at the same time but on this occasion it was just the melody.

On August 12th 2000 the Russian submarine Kursk sank with all 118 on board lost. I remember seeing a photograph of one of the lost sailors’ mothers and her face was one of total anguish.

Shortly afterwards I was in London’s Leicester Square with my son Chris who was then aged 15. We were about to go into the Odeon cinema when my phone rang and I was told that his close friend, Richard had suddenly and un-expectantly died. I remember like it was yesterday sitting Chris down and telling him the tragic news before we immediately returned home.

The two incidents made me think of how the Psalmists would cry out to God in their songs/poems which are called laments. I searched through the Psalms and found the words of Psalms 130 and 6 and also those from Isaiah 55 to convey exactly what the Russian mother and all the family and friends of Richard were feeling.

Out of the depths I cry out to you oh Lord,

Wont you please hear me do not hide your face.

My soul is in anguish it cries “Why or why Lord?”

I’m worn out from groaning I’m drenched in my tears.

So I had the words but no melody- the most recent tune in my head – the one from the return journey from Waverley Abbey House was too fast and so totally inappropriate for such anguished words. But what if I slowed the tune down? Well that is what I did and the song that resulted became “Out of the Depths.” It was originally sung by Lucy Stimpson- Maynard on the Mustard Seed album “Love is the Way.”

Tragically I had another dear friend whose son died. Someone who had the “Love is the Way” album gave the “Out of the Depths” track to the family which they played constantly giving them much strength and comfort. Somehow Lucy even managed to sing the song live at my friend’s son’s funeral.

I also sent Selwyn Hughes a copy when his son died but today I have chosen another version of the song, this one by Chloe Brokenshire who sang the part of Mary Magdalene on the CD of Risen! The Musical. She sings the song after watching Jesus crucified and I offer it here, together with the songs or the past two blogs (“This is not Heaven,” “Allow His Loving Arms” and “Oh Lord Here my Voice”) to all those bereaved in the recent horrific and tragic events in London and Manchester.