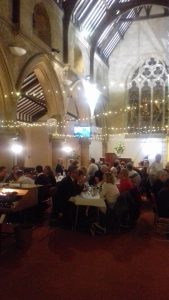 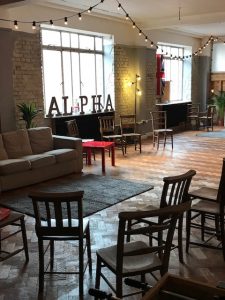 We are now three weeks into the Alpha course – the featured pics show how my church of Holy Rood, Stubbington is set up for Alpha and also how it is set up at Harbour Church, Portsmouth which I visited on Sunday.

All this reminds me of my first Alpha course many years ago- 20 in fact! I thought I would share again with you how it all happened taking extracts from early editions of this blog posted back in 2014

I was not so much worried about how I died, although I did quite fancy being a hero and rescuing someone from drowning or from a blazing inferno (as long as it did not hurt too much) No I was worried about what happened after I died.  Some friends asked why I worried as I would not know anything about it – it would be the same as it was before I had been born or it would be just like switching off a light bulb. However the thought of no existence- just switching off to nothing freaked me out.  When I was  about 15 years old  I broke my leg playing football – it  ached and ached for about two weeks afterwards and then someone visited me who had previously broken his leg but who told me it stopped hurting after a couple of days. So dear mum took me back to the hospital to have another x ray and the bone was found to be still apart – I think they forgot to set it. So I had to have a “Denham Compression Plate” fitted which was screwed into the whole length of my tibia. The operation took about six hours but after they put the needle in with the anesthetic and I counted to ten I woke up straight away – of course I did not it just seemed that way- my brain had been shut down for six hours- I had no knowledge of existence and that is what I thought being dead might be like and that scared me to death (sorry)

That experience had such an effect on me that I have never had a general anesthetic since- even opting for a local when I had a hernia op.

On the other hand there was of course the possibility that death is not the end, in which case what comes next?  Reincarnation did not work for me so what about going to heaven or heaven forbid (sorry again) hell?  I had studied RE for O Level and also for A Level (on the few occasions I attended 6th Form) I had also been a choir boy and had been confirmed into the Church of England so I knew  the basics of the Christian faith although I could never work out how Christ being crucified could “save me from my sins” However  I would always say that  I believed in God but now I was beginning to realise that I had to decide whether I really did as He seemed to  be the only one who could sort  out this death issue for me.

My dear friend Bob Milliken (the legend that is Mr Mill) had, I later found out, been praying for me for eight years, not non -stop of course, but nevertheless showing real perseverance.  He kept putting Christian literature in my pigeon hole at school -for example testimonies of famous sportspeople who were Christians.  I never really read them, although because of my respect for Mr Mill I never threw them away.

One day at the end of term Bob invited me to go to his church in Paulsgrove.  As it was a Christmas Service I thought I would go and sing a few Carols and that would appease him. So I went with my son Chris assuring him that we would only have to sing “Oh Little Town of Bethlehem” listen to a sermon on the Wise Men and then we could come home.

You can imagine my shock when the Pastor (it was a Baptist Church) started talking not about The Wise Men but about death- he got my undivided attention and it seemed like I was the only person in the church and  so the only one the Pastor was talking to.  At the end of the service Bob introduced me to the old gentleman who had been sitting to my left – his dad.  Bob went off to talk to someone and I chatted to his dad, obviously also called Mr Milliken.  Mr Milliken told me that he had been a Missionary in the Belgium Congo and that he and his wife had evangelised the natives by singing hymns to them around camp fires; his wife playing a squeeze box. I knew that his wife, Bob’s mum, had died about two years previously and I found myself asking “Oh is Mr Milliken replied, not with a “God willing” or “That’s a nice thought.”  He simply replied with one word and it was the one word that began to change my life – “Yes”