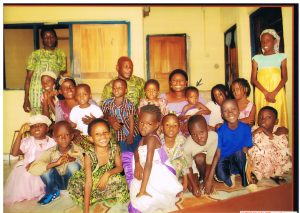 Pastor Patrick with orphans from his congregation 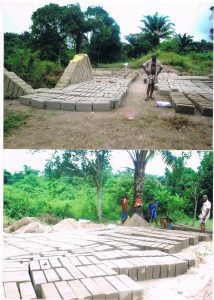 So again I do hope you will take a look at the My donate fund raising project http://mydonate.bt.com/events/portsmouthgospelchoir/452133 As a reminder Mustard Seed Songs are hoping to fund the production of a CD that we are recording with the Portsmouth Gospel Choir who recently sang with Seal in the finals of BBC One’s “Pitch Battle.” Then, with proceeds from sales of the CD which is entitled “How Great Are His Signs,” we intend to build a church in Southern Nigeria- the church leader there is a personal friend called Patrick Oki so I know how important this is for their community, many of whom are orphans.
May I take this opportunity to tell you a little more of Pastor Patrick Oki?
On the death of his Grandfather (his father had already died) Patrick Oki was about to become Chief of his village in Nigeria. However the elders wanted him to denounce his Christian faith and return to the native religion which had been practiced before his Grandfather was Chief – this included human sacrifice. When he refused his life was in danger and so he sought asylum in England. It was in Haslar Detention Centre, Gosport that I first met Patrick some ten years ago. Unfortunately his asylum claim was rejected and he was deported to Nigeria where he had to re locate a long way from his village to stay safe.
Patrick tells me that when he returned from England he was ill for two years, not being able to walk or even stand; having been rejected and abandoned by his family and friends- he was left to die, with no one to care for him except his son Emmanuel. Sometimes they had no food to eat, and he even prayed for God to take his life- all this because he had denounced the religious tradition of his people to follow Jesus. Patrick says “I made a vow that if the Lord healed me I would serve him all the rest of my life and one day the Lord sent a servant – Evangelist Lady Lizbeth who prayerfully joined hands with me and the Lord set me free. Praise the Lord I became born again to the glory of God.”

Patrick is now indeed serving God and is an unpaid Pastor in Cross River State, Southern Nigeria. His congregation is, at present worshiping in a hired hall and are looking after a number of orphans. Mustard Seed Songs are working hard to fund the building of a new church for them which is to be named after our musical Risen! – The Risen Christ Central Chapel. That is why we are producing the CD with the fabulous Portsmouth Gospel Choir and why I have included the My donate fund raising page.

The featured pics show Pastor Patrick with bricks that have been made ready for the church building to begin (once the funding is achieved) Also some of the orphan children that make up Pastor Patrick’s congregation.

The featured song is Patrick’s favourite “A Mustard Seed of Faith” sang here by the Mustard Seed Soul Band. The Portsmouth Gospel Choir sing their own amazing version on their forthcoming CD- watch this space to find out how to obtain a copy.