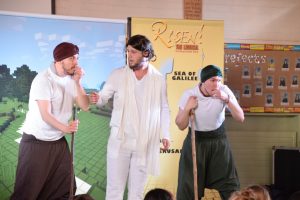 Jesus meets Cleopas and his friend on the road to Emmaus – from Risen! The Musical Theatre in Education

On Sunday at the 6.30 pm Service at Holy Rood church, a question was asked by Rev. Colin Prestige “How many resurrection appearances were there of Jesus”? There were a number of different answers coming from the congregation – I did a quick add up in my head and came up with eleven. Colin said “Close but there were in fact twelve.”
Afterwards I disagreed that it was twelve and Colin and myself exchanged some emails. Colin sent me a link to a blog by Msgr. Charles Pope • April 9, 2012 that records what he believes to be a likely sequence of events. For my suggested eleven appearances I had placed appearances 5 and 6 together and Pope himself states that they are likely to be synonymous.
Incidentally this sequence of events is very similar to that which I chronicled for Risen! The Musical
The Morning of Day One
Very early in the morning a group of several women, including Mary Magdalene, approach the tomb to complete burial customs on behalf of Jesus (Matt 28:1; Mk 16:1; Jn 20:1).

They behold the tomb opened and are alarmed. Mary Magdalene runs to Peter and John with distressing news of likely grave robbers (Jn 20:2)

The women who remain encounter an angel who declared to them that Jesus had risen and that they should tell this to the brethren (Mk 16:5 Lk 24:4; Mt 28:5).

They are filled with fear at first and depart from the tomb afraid to speak (Mk 16:8)

The other women have reported what the angels say to the Apostles. Peter and John have not yet returned and these remaining apostles are dismissive of the women’s story at first (Lk 24:9-11).

Mary, lingering at the tomb weeps and is fearful. Peering into the tomb she sees this time two angels who wonder why she weeps. Jesus then approaches her from behind. Not looking directly at Jesus, she supposes him to be the gardener. Then he calls her by name, and Mary, recognizing his voice, turns and sees him. Filled with joy she clings to him. (APPEARANCE 1) (Jn 20:16)
The other women have departed the apostles and are on their way possibly back home. Jesus then appears to them (Mt 28:9) after he had dispatched Mary. He also sends them back to the apostles with the news that he had risen and that he would see them. (APPEARANCE 2)
The Afternoon and evening of day one.

Later that Day, two disciples on their way to Emmaus are pondering what they have heard about rumours of his resurrection. Jesus comes up behind them but they are prevented from recognizing him. First Jesus breaks open the word for them, then sits at table with them and celebrates the Eucharist whereupon their eyes are opened and they recognize him in the breaking of the bread. (APPEARANCE 3) (Lk 24:13-30)

The two disciples returned that evening to Jerusalem and went to the Eleven. At first the eleven disbelieved them just as they had the women (Mk 16:13). Nevertheless they continue to relate what they had experienced. At some point Peter drew apart from the others (perhaps for a walk?) And the Lord appeared to Peter (APPEARANCE 4) (Lk 24:34; 1 Cor 15:5) who informed the other ten who then believed. Thus the disciples from Emmaus (still lingering with the apostles) were now told (perhaps by way of apology) that it was in indeed true that Jesus had risen (Lk 24:34).

Almost at the same moment Jesus appears to the small gathering of apostles and the two disciples from Emmaus. (APPEARANCE 5) Thomas was absent (although the Lucan text describes the appearance as to “the eleven” this is probably just a euphemism for “the apostles” as a group) They are startled but Jesus reassures them and opens the scriptures to them (Lk 24:36ff).

There is some debate as to whether he appeared to them a second time that night. The Johannine account has significantly different data about the appearance on the first Sunday evening from the Lucan account. Is it merely different data about the same account or is it a wholly separate appearance? It is not possible to say. Nevertheless since the data is so different we can call it (APPEARANCE 6) (Jn 20:19ff) though it is likely synonymous with appearance 5.

Jesus appears once again (APPEARANCE 7) to the apostles gathered. This time Thomas is with them. He calls Thomas to faith who now confesses Jesus to be Lord and God. (Jn 20:24-29)

The apostles received some instructions to return to Galilee (Mt 28:10; Mk 16:7) where they would see Jesus. Thus they spent some of the week journeying 60 miles to the north. This would have taken some time. We can imagine them making the trek north during the intervening days.

The time frame of the next appearance is somewhat vague. John merely says “After this.” Likely it is a matter of days or a week at best. The scene is at the Sea of Galilee. Not all the Twelve are present. They have gone fishing, and Jesus summons them from the lakeside. They come to shore and see him (APPEARANCE 8 ) . Peter has a poignant discussion with Jesus in this appearance and is commissioned to tend the flock of Christ (Jn 21).

The Appearance to the 500. Of all the appearances you might think that this one would have been recorded in some detail since it was the most widely experienced appearance. Many accounts, it seems, would have existed and at least one would have made its way into the scriptures. Yet there is no account of it, other than it did in fact happen. Paul records the fact of this appearance: 1 Cor 15:6 Then he appeared to more than five hundred brethren at one time, most of whom are still alive, though some have fallen asleep. (APPEARANCE 9) Where did this take place. What was it like. What was the reaction? We simply do not know. Proof once again that the Bible is not a history book in the conventional sense. Rather it is a highly selective telling of what took place, not a complete account. The Bible makes no pretences to be something it is not. It is quite clear that it is a selective book: (Jn 20:30).

The Appearance to James. Here again we do not have a description of this appearance only a remark by Paul that it did in fact happen: 1 Cor 15:7 Then he appeared to James. (APPEARANCE 10) The time frame is not clear. Only that it happened after the appearance to the five hundred and before the final appearance to the apostles.

The rest of the forty days.

Jesus certainly had other on-going appearances with the disciples. Luke attests to this in Acts when he writes: Acts 1:3 To them he presented himself alive after his passion by many proofs, appearing to them during forty days, and speaking of the kingdom of God.

During this time there is perhaps the one appearance we can attribute to this time period as recorded by Matthew (Mt 28:16ff) and Mark (Mk 16:14ff). It takes place an “a mountaintop in Galilee.” Mark adds that they were reclining at table. For these notes this appearance (time frame uncertain) is referred to as (APPEARANCE 11) It is here that he give the great commission. Although Mark’s text may seem to imply that Jesus was taken up from this mountain, such a conclusion is rash since Mark only indicates that Jesus ascended only “after he had spoken to them” (Mk 16:19).

Evidently Jesus had also summoned them back to Jerusalem at least toward the end of the period of the forty days. There they would be present for the feast of Pentecost. We can imagine frequent appearances with on-going instruction for Luke records that Jesus “stayed with them.” Most of these appearances and discourses are not recorded. Luke writes in Acts: And while staying with them he charged them not to depart from Jerusalem, but to wait for the promise of the Father, which, he said, “you heard from me, for John baptized with water, but before many days you shall be baptized with the Holy Spirit.” (Acts 1:4)

The final appearance and ascension:

After forty days of appearances and instructions we have a final account of the last appearance (APPEARANCE 12) wherein he led them out to a place near Bethany, gave them final instructions to wait in Jerusalem until the Holy Spirit was sent. And then he was taken up to heaven in their very sight. (Lk 24:50-53; Acts 1:1-11).

“Failure is not an event – it is only an option”