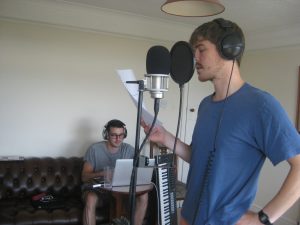 Alex Knox with Joffy Girling recording the part of Luke for the sequel to Risen!

A couple of weeks ago I listed the present projects that Mustard Seed Songs are, at present working on. They included:

Risen! The Musical being broadcast on YouTube with subtitles in languages such as Romanian and Spanish.

The success of the Easter tour of the Risen! The Musical Theatre in Education of 17 schools and the hope that funding will be forthcoming to allow for a 2019 tour.

The release of the Portsmouth Gospel Choir’s CD “How Great Are His Signs” with proceeds going to the building of the Risen Christ Central Chapel in Southern Nigeria.

How we have been posting clips of the Portsmouth Gospel Choir’s concert at Kings Church, Portsmouth (in fact the full concert will be posted on You Tube today)

The building of the Risen Christ Central Chapel in Southern Nigeria.

What I did not mention is that we have also been working on the sequel to Risen! The Musical which has a working title of” The Acts of the Apostles – Part One “Fire!” The title is, I trust self -explanatory. The musical is based on the book of the Acts of the Apostles chapters 1- 12. The plan is to one day write a musical based on the Acts of the Apostles Chapters 13- 28 but that is for some time in the future! In the meantime the script has been written, Joffy Girling our amazing Musical Director has recorded the piano score and Alex Knox (see blog of Nov 24th 2016) has sung the guides. He also sung the part of Luke as shown in the featured pic. We now need to record all the other vocal parts and will be looking to members of the wonderful “London Touring Cast” for this as soon as we gain the funding. Today’s featured song   “I Will Tell” will be one of the songs from “Fire!”

Learn from the mistakes of others- you will never live long enough to make them all yourself.