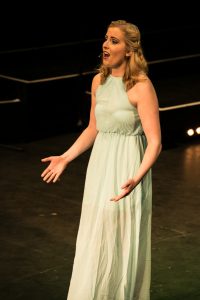 Jodie May Quirke playing the role of Mary Magdalene in Risen! The Musical

Jodie May Quirke of the fabulous London Touring Cast is todays featured pic. She played the part of Mary Magdalene in Risen! The Musical which is now available to view on YouTube with sub – titles in both Romanian and Spanish . The link to the English version without sub-titles is https://youtu.be/wYUX1CQEjoY

I specifically mention her today as she has just returned to teach Performing Arts in Dubai. That made me think of what the other 17 members of the cast are doing and next week I will give you an update. Today however I would like to take a walk down memory lane and remember how, by God’s grace. Mustard Seed Songs were able to have such a talented and professional cast perform Risen! The Musical

Joffy Girling, our Musical Director and an ex- Crofton student had been working with me on the double album of Risen!-The Musical for four years. We were considering who to use to master the album when Joffy thought of his ex-Lecturer from Birmingham University, Dr Andrew Bourbon – now a Senior Lecturer at the London College of Music (LCM) in Ealing – part of the University of West London.  Andrew agreed to meet Joffy thinking it was just a catch up with his old star pupil. However he agreed to take on the mastering project not really realising how big a job it would be- 38 tracks! It was during the mastering process that he began to love the music so much so that he talked about it to his friend, the Head of Performing Arts at LCM. From this another Lecturer from the department, Niamh McGuckin became interested and I met with her during a mastering session at LCM.

I had a plan by which I was looking for students of Musical Theatre to learn the Risen! songs in order to perform Risen! in concert format at a forthcoming Coventry Pentecost Festival.  I also had in mind that the same group, having learnt the songs,  could then  be involved in a summer vacation workshop with a view to Risen!- becoming a stage production- hopefully at the New Theatre Royal Portsmouth which was scheduled to re- open after two years of extensive refurbishment.  As my conversation unfolded with Niamh I could see that she was really interested -she had heard the music and gave me the impression she would like to take part in the production herself. In the end I bit the bullet and asked if there was any chance of making the proposed Coventry Festival , not a concert but a full stage production – and even though there was little time left  to rehearse  the answer from Niamh was an emphatic “YES.”

Anyway Niamh then recruited a cast of 12 performers, either post graduates from LCM or students in their fourth and final year.  So I drove up to Ealing to meet them at a rehearsal in one of the LCM studios – I was greeted by Niamh and on the way to the studio could hear the cast singing “Jesus is My Lord” and it sounded awesome.  I was then introduced to Leah, Claire, Jodie, Mikey, Johnny, Andrew, Kieran, Jacob, Benny, Ennio and Adam.  Leah sang for me the opening to “Jesus is my Lord” then Claire “My Beloved King” and Jodie “I have seen Him” – I knew straight away that these guys were going to be something special!

They all rehearsed so hard and in just a few weeks were ready to perform at the Coventry Pentecost Festival. They were fantastic and received a hugely deserved standing ovation: and that was the start of an ongoing and wonderful relationship between them and Mustard Seed Songs.