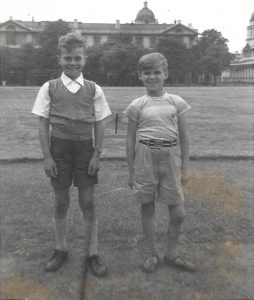 I need to check that in my earliest blog posts I mentioned growing up in Gillingham, Kent and not moving to Portsmouth until I was nine years old. But anyway when I lived in Gillingham I went to the most fantastic Primary school ever- Forge Lane. The teachers were just so unbelievably kind and I had the most wonderful time there. I have, on quite a few occasions returned to visit Gillingham, the old street where I lived – East Street and Forge Lane School- I was so very fortunate to have had such a wonderful childhood.

One of the pupils at Forge Lane was Clive Reader – I remember him being brilliant at art. Well about a year ago I received a Facebook message from him asking if I was the same Ken Shearsmith that he had known from his schooldays. I replied that I was and sent him some class photographs. I did not hear back from him and left it, but then a week or so ago I thought I would try again- again nothing so I contacted one of his Facebook friends – his daughter in fact who told me that Clive was useless with social media and had about three Facebook accounts, none of which he ever used. However she gave me his telephone no and I rang him. We spent about an hour on the phone reminiscing about those schooldays which were a very, very long time ago. If I said 50 years that would not even be close!

So you might think this is all very nice but what is your point Ken? Well I have heard one argument for not believing the Gospel stories is that they were written too long after Jesus’ death to be accurate. There is some debate as to which Gospel was written first and when but it was about 40 years after Jesus’ ascension. Some would say that is such a long time that memories of what happened during the lifetime of Jesus are bound to get distorted. Not so!  Stories of WW2 are usually regarded as authentic if told by first hand witnesses and that was nearly 80 years ago. And in the case of Clive and me we remembered and agreed on what happened at Forge Lane School because we were actually there and because we were first hand witnesses our stories can be believed without question.

The disciples Matthew and John were eye witnesses of Jesus’ ministry, Mark heard the stories first hand from the disciple Peter and Luke was a respected doctor and historian who many believe heard about Jesus directly from His mother Mary. Their Gospels of Jesus can be believed in the same way that Clive and myself can be believed- passage of time is not important if the testimonies come from eye witnesses.

Jesus gives most when most is taken away