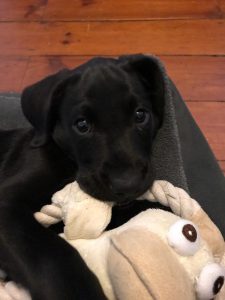 In response to thousands of requests I have attached another photo of our lovely new Labrador puppy called Genna. (Well to say thousands may be a bit of an exaggeration but there has been a least one – from Caroline my wife!)

It has been a great week with Risen! The Musical now with subtitles in Mandarin thanks to translator Katherine Olivia Hobbs and film editor Alex-Emanuel Şerban. More of that next week I hope when it goes live on YouTube. Also we had Alex Knox recording some more of Luke for our next musical ACTS – Part One. Oscar Batterham recording Theophilus and my old friend Ron Long recording Simon the Sorcerer- all course all recorded by Mustard Seed Songs’ brilliant Musical Director – Joffy Girling. Again more of that next week as today I wanted to share a real message of encouragement from someone who had seen Risen! The Musical on Revelation TV and who then contacted me to purchase DVDs of Risen! for his friends. He wrote:

I sat down and watched the DVD with a couple of Christian friends earlier today. Their comments were along the following lines – excellent quality, been very thoughtfully and prayerfully crafted, tremendous enthusiasm (are the cast Christian?) and energy, comes across as very sincere / authentic – connects with the emotions, simple but very effective staging, sympathetic lighting, great camera work, its simplicity of presentation (i.e. costumes) gives the production relevance to today’s society, didn’t expect to be as impacted as much as they were! Brilliant!!

It is so encouraging when one receives a message such as this and it reminded me of how important Barnabas was to the ministry of St Paul. Barnabas in fact means “Son of Encouragement” and Barnabas Ministry of Encouragement is the name of a charity based in Mindanao, Philippines which was founded by my two very good friends Jim and Evelyn Palmer.

Barnabas is first mentioned in Chapter Four of ACTS:

Joseph, a Levite from Cyprus, whom the apostles called Barnabas (which means “son of encouragement”), sold a field he owned and brought the money and put it at the apostles’ feet.

So Barnabas was obviously very generous- on another occasion he stuck up for Saul (later to be known as Paul) when the disciples were understandably afraid of him as he had been persecuting followers of Jesus and had, in fact condoned the stoning of Stephen the first Christian martyr.

When he (Paul) came to Jerusalem, he tried to join the disciples, but they were all afraid of him, not believing that he really was a disciple. 27 But Barnabas took him and brought him to the apostles. He told them how Saul on his journey had seen the Lord and that the Lord had spoken to him, and how in Damascus he had preached fearlessly in the name of Jesus.

So in a nutshell being an encourager is a great and very important gift – one we all have – but one that we, and I include myself in this, – just need to use it more.