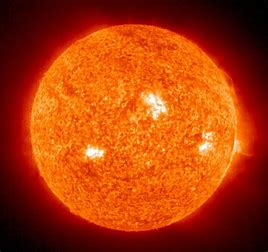 So the sun is 93 million miles away from earth and its surface temperature is 10,000 degrees Fahrenheit – if the earth’s temperature was 50 degrees hotter or colder all life would cease.  So it is an accident that the earth is not further away or closer to us  It is also an accident that we rotate 365 times a year as we pass around the sun. If we rotated only 36 times a year our days would be ten times as long and we’d be terribly hot on one side and unbearably cold on the other and life as we know it would cease.

I do get a tad cross when some people say that science has disproved God – in fact I would say that facts like the above actually help to prove there is a God.  Another thing that annoys me is schools teaching evolution as a fact rather than a theory. I can see that Genna, our lovely Labrador puppy, evolved from a wolf (especially when by accident Caroline or I get a nip!) however that is not at all the same as believing that she and we both evolved from some form of  “pond life.”  It seems much more likely to me that Genna evolved from the first wolf/dog that was designed by God and we evolved from the first human being that was designed by God.  Yes it takes faith to believe this but, as I said, it also takes faith to believe that all creation happened by accident and then all the different, wonderful and amazing species somehow evolved from “pond life.”

Anyway if there is a Designer who we could call God – it would be pretty amazing if we were able to get to know Him – even more amazing if He wanted to get to know us.  But how could He do that? Would He not have to leave where He abides  (let’s call it heaven) and come to earth? Now wouldn’t that be amazing – God coming to live with us – God with us – Emmanuel – yes that would be truly amazing! That would warrant a really big celebration and we could call it ….. Christmas!!

Doubt your doubts and believe your beliefs