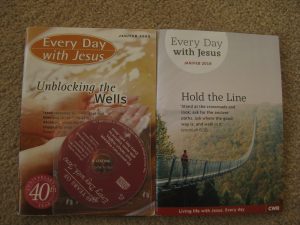 I have been reading Every Day with Jesus (EDWJ) since first becoming a Christian in 1997. It is published by CWR and written by Rev. Selwyn Hughes. In fact Selwyn died in 2006 but EDWJ is still published every two months with earlier editions revised and updated by CWR’s Chief Executive, Mick Brooks.  The revised editions are also given new titles and I was so pleased to discover that the present edition “Hold the Line” had originally been titled “Unblocking the Wells.” This was a special edition to celebrate the 40th anniversary of EDWJ.  Now on its front cover you will see from the photograph what is a mini CD (it slots onto the inner part of a CD tray) and this mini CD contains tracks from Mustard Seed Songs – one of which is featured today.  Here is the story which is taken from my blog of July 3rd 2014:

When taking part in the Alpha course I had started to read Selwyn Hughes’s daily devotions -“Every Day With Jesus” (EDWJ) published by CWR (Crusade for World Revival.)  Some of the songs I was writing were inspired by Selwyn’s words, for example   “Jesus is the Alphabet” and “In Times of Trouble” from our first album “I Look Up To The Heavens.”  “Lord I Come to Bathe in Your Glory,” “Glorious is His Humility” and “How Can I Love You More?” from “Love is the Way,”  our  second album and from our third “Uplifted”  “ We Can’t Set The World on Fire. “

I had become a Partner (supporter) of CWR and on one visit to their HQ, the beautiful Waverley Abbey House in Farnham, I visited their shop to find only a limited number of CDs on sale.  Mick Brooks, the CWR Chief Executive explained that the shop was run by a franchise but soon CWR would be running it themselves.  I left Waverley with the idea that I would send them some Mustard Seed CDs in the hope that they would be interested in selling them in their shop.

I did this and then waited and waited.  I decided it was another rejection just like all the pop songs I had written previously. However after a month or two I decided to give CWR a ring and when I did I was told “Have you not received our letter? We have invited you to Waverley to discuss how we can use your songs – to be honest when we read you are a PE teacher with no musical experience we were not expecting much but when we heard the songs we were amazed.”

So off I went to Waverley to have a meeting with Mick Brooks and Mike Ashford, the Head of Marketing.  Mick told me that they were considering giving one of our CDs away to every new subscriber to EDWJ.  I asked how many this might be and was  told about 500 – I was overjoyed;  although our three CDs were selling well it was hard work doing it all by word of mouth. Then Mike Ashcroft interjected to say that the marketing department had just had a meeting in which they floated the idea of making a mini CD of Mustard Seed songs and attaching them to every copy of the 40th Anniversary edition of EDWJ. Again I asked how many this might be and nearly fell off my chair when the reply was 80, 000 – distributed world- wide!!

The song I have chosen to feature this week is one that Selwyn inspired in the year 2000, when writing his devotional about the Book of Revelation.  He explains that the image of Christ in Revelation 1: 12-16 is the one that he always holds before him when he prays

And when I turned I saw seven golden lampstands, 13 and among the lampstands was someone like a son of man,] dressed in a robe reaching down to his feet and with a golden sash round his chest. 14 The hair on his head was white like wool, as white as snow, and his eyes were like blazing fire. 15 His feet were like bronze glowing in a furnace, and his voice was like the sound of rushing waters. 16 In his right hand he held seven stars, and coming out of his mouth was a sharp, double-edged sword. His face was like the sun shining in all its brilliance.

Since that special edition of EDWJ in 2005 Mustard Seed Songs have had a very close association with CWR and one of our songs was played at Selwyn’s Thanksgiving  Service in Central Hall, Westminster- but more of that next week.

A problem is only a solution in disguise