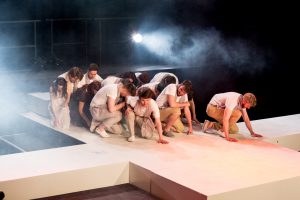 The disciples are at first blinded by the light as Jesus ascends to heaven ( from Risen! The Musical)

So today is Ascension Day which marks the 40th day of Easter and in another ten days there is the Day of Pentecost when the disciples were empowered by the Holy Spirit.
As the name indicates, Ascension Day describes the day of Jesus’s ascension into heaven 40 days after his resurrection on Easter Sunday.
After rising from the dead, Christ spent his final few weeks on Earth passing on his teachings to his disciples. He then led them up to the Mount of Olive in Jerusalem, where he said the time had come for him to be returned to God.
Acts: 1:
“Then they gathered around him and asked him, “Lord, are you at this time going to restore the kingdom to Israel?”
He said to them: “It is not for you to know the times or dates the Father has set by his own authority. But you will receive power when the Holy Spirit comes on you; and you will be my witnesses in Jerusalem, and in all Judea and Samaria, and to the ends of the earth.”
After he said this, he was taken up before their very eyes, and a cloud hid him from their sight.
They were looking intently up into the sky as he was going, when suddenly two men dressed in white stood beside them. “Men of Galilee,” they said, “why do you stand here looking into the sky? This same Jesus, who has been taken from you into heaven, will come back in the same way you have seen him go into heaven.”
Christ’s Ascension empowers the following words , which I personally find so encouraging:
John 14: 1-3 (New International Version- 1984)
Do not let your hearts be troubled. Trust in God trust also in me. In my Father’s house are many rooms; if it were not so I would have told you. I am going there to prepare a place for you. And if I go and prepare a place for you, I will come back and take you to be with me that you also may be where I am.
Quote for the week
You can’t control the direction of the wind but by God’s grace you can adjust your sails to take you where you need to go.
Word for Today