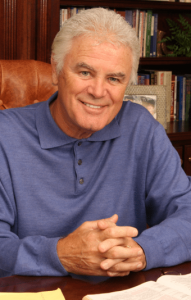 Do Not Let Your Hearts Be Troubled featuring Ben Morris from the album Risen!The Musical “Original Cast Recording” recorded and produced by Joffy Girling

Last week I was on holiday in Wales and took with me a book written by Bob Gass entitled “Do Not Be Afraid. “ In addition to “Every Day With Jesus” I also read “Word For Today” which Bob writes for United Christian Broadcasters (UCB). Both of these daily devotions have inspired lyrics for many Mustard Seed songs.
As I was reading “Do Not Be Afraid” I thought I would find out a bit more about Bob and was astounded and very saddened to discover that he had died only 2 days earlier on June 5th aged 75.
Here is a little of his amazing life:
Bob was born in Belfast, Northern Ireland. His father died when he was 12 and his mother was left to rear him as well as his brother, Neil, and sister, Ruth, on a government pension. His mother was a formative influence on his life, encouraging him to attend church as often as possible. ‘She came into the Kingdom at a hundred miles an hour,’ Bob says, ‘and never slowed down.’
By the time Bob was 12, his heroes were not movie stars or sports celebrities but men and women of God. At this time, he gave his life to Christ. He preached his first sermon at 13, writing it out in a school exercise book. As he began, so he continued writing out each reading for Word for Today longhand in a yellow legal pad.
He was fortunate as a teenager to have Gordon Magee as his mentor. When he moved from Ireland to the United States, Magee offered to pay for Bob’s passage to America. A few weeks before his 18th birthday, Bob arrived in Houston with two sermons in a briefcase and 25 cents in his pocket. Magee asked his friends across the US to give Bob opportunities to preach. For many years he gave Bob constructive criticism of his sermons.
Bob’s first church was in the Bay of Fundy, Back Bay, New Brunswick, Canada. He pastored there for two years and then moved to Bangor, Maine to take over a church from a retiring pastor. Upon his arrival, there were approximately 300 families in the church. After twelve years the church had grown to over twelve hundred families
In 1994, Bob wrote the first edition of Word For Today. At that time, God connected him with United Christian Broadcasters, who were trying to launch Christian TV and radio in the U.K. Bob partnered with them, and today they publish more than 450,000 copies of the devotional each quarter in the U.K., and an additional six million copies per quarter in other countries.
Bob was married to his wife, Debby, for more than 20 years and she helped with the writing of Word for Today.
In addition to his passion for his family and his calling to share God’s Word, Bob and Debby shared a deep passion for the orphans of Romania. They first went to Romania in 1991, and in the last 28 years they built a transition home called The Village of Hope, and have rescued over 5,000 children from the streets, the sex-trade, and orphanages and placed them into foster families.
Bob himself, actually planned for his passing several years ago with a long writing project, which means the devotional will continue long after he passed away.

Bob’s vision for Word For Today was to ‘whet your appetite so much that you’ll say, “Wow! I didn’t know that was in the Bible! Maybe I’d better go and read it for myself.”‘
All at Mustard Seed Songs send their deepest sympathy to all Bob’s family and friends. He was truly inspirational and will be very much missed.
Quote of the week
Courage isn’t the absence of fear, it’s the mastery of it”
Bob Gass.