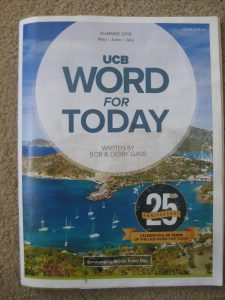 As I wrote in the blog of two weeks ago the writer of the daily devotion “Word For Today” Bob Gass, sadly passed away on June 5th aged 75.  I thought I would share one of his devotions as a sort of testimony to his life.  This extract comes from his devotion of Sunday, 23rd June 2019.

Almost anyone can spot the problem, discuss the problem and complain about the problem, but a solution-oriented person looks always to solve the problem. Murray Spangler was such a person. As a departmental store cleaner he decided the only way to overcome the boredom of his job, which consisted of sweeping floors, was to find a more innovative way to do it. Plus he had the added incentive of being allergic to the dust he was sweeping away each day.  Then a thought came to him – instead of sweeping up the dust, maybe there is a way to suck it up. Where do such creative thoughts come from? God our Creator.  And since you are His offspring He will share His ideas with you. Spangler’s questions led him to invent a crude but workable vacuum cleaner. He then sought out an old friend in the leather business to finance the manufacturing of his invention. The man’s name was H.W. Hoover. Not only did Hoover vacuum cleaners become very popular, but “hoovering” became, at least for one generation, synonymous with sweeping floors. Built into every obstacle is an opportunity, every question an answer, every problem, a solution. So don’t be afraid to question methods, systems and equipment and ask “Is there a better way?” The world has been enriched by people who dared to ask that question. And you can be such a person, for God promises to bless “all to which you set your hand.”

As long as you believe that more is better you will never be satisfied. Why because you’ll never live long enough to have it all!