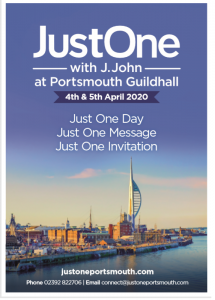 I am privileged to have been asked by my dear friend Mick Mellows to be part of the team that is putting on the “Just One” event in the Portsmouth Guildhall on April 4th and 5th next year The “Just One” event is being organised by the charity “Philo Trust” in conjunction with the charity “Faith and Football” , of which Mick is Director.
The idea behind “Just One” is that one follower of Jesus invites someone who is not yet a follower to listen to evangelist Canon J. John. J. John has been described as a creative speaker with an appeal that transcends gender, age, race, culture and occupation. His much-loved art of storytelling helps people to discover spiritual meaning in a way that makes sense of everyday life. He has been speaking of the relevance of Christianity since 1975.
In addition to hearing J. John speak the evening will consist of testimonies and music from Noel Robinson who wrote, among others, the classic songs “All heaven declares” “Come Lord Jesus” and “He is Risen.” The Portsmouth Gospel Choir (which is where I come i ) will also be there singing songs such as today’s featured song “I Love You Lord” and “Mustard Seed of Faith” both of which can be downloaded via https://mustardseedsongs.hearnow.com/
“Just One” has already taken place, with thousands and thousands, in attendance at the Arsenal Football Club ground and Gillingham Football club ground. It was originally going to take place at Portsmouth Football club’s Fratton Park but when this was not available Mick contacted the Portsmouth Guildhall who were delighted to stage the event.
The amazing “Just One” which took place at the Emirates Stadium (Arsenal’s ground) is captured in this video https://justone.co.uk/emirates/
By the way I will tell you more of Mick and “Faith and Football” in next week’s blog- meanwhile Caroline, Genna and I are off to stay at Caroline’s brother’s place in Malvern to celebrate our wedding anniversary. Caroline’s twin brother Chris has a Labrador puppy called Bella so lots of dog walking in the Malvern Hills is on the cards.
Quote for the week
Money is a universal provider for everything but happiness and a passport to everywhere but to heaven.
Every Day With Jesus