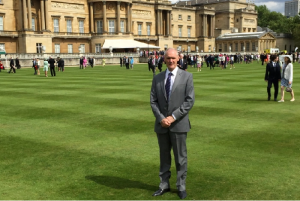 Last week I said that I am privileged to have been asked by my dear friend Mick Mellows to be part of the team that is putting on the “Just One” event in the Portsmouth Guildhall on April 4th and 5th next year . The “Just One” event which includes a talk from J. John and music from the Portsmouth Gospel Choir and Noel Robinson, is being organised by the charity “Philo Trust” in conjunction with the charity “Faith and Football”, of which Mick is Director. I also said that I would tell you more of Mick and “Faith and Football” this week.
I was in my second year of studying to be a PE teacher at King Alfred’s College, Winchester and the buzz was that the centre forward of the England amateur football team was coming to study PE. I had expected at least “Roy of the Rovers” so at first sight Mick did not look anything special, however he was quick, had a great left foot and was totally dedicated. It was not long before he captained the Ist team which I just about scraped into (occasionally) and part of that job was to run the coaching sessions. It was in these that his experience, knowledge and professionalism shone through.
It turned out that Mick had the same room in the “Carfax “student accommodation that I had in my first year at King Alfred’s. A room close to ours was felt to be haunted and the whole place was pretty spooky- so Mick and I had much to talk about outside of football.
After we left college Mick spent a year teaching before playing football professionally in Belgium and eventually Portsmouth FC. It was at this time that we renewed our friendship – I would go to watch him play every week and then meet the Pompey players and the opposition players afterwards in the Players bar. He and his wife Felicity, together with my wife and I would then go for a curry (often paid for by Mick’s winning bonus) Our friendship grew with the four of us going on regular holidays to France. When my two sons, James and Chris were born Mick and Felicity became their God parents.
Felicity had studied what was then called Divinity at College – she persuaded Mick to join her at St Mary’s church in Portchester Castle and that led him to become a Christian. He later formed the charity “Faith and Football” with the Pompey legend, Linvoy Primus. The work that they do includes “Community Football Leagues, the Social Enterprise and Business Challenge, the Leadership Academy, the Extra Time Literacy Scheme, Walking Football and the Alpha Course. You can read more by visiting www.faithandfootball.org.uk
In 2015 all the tremendous work of “Faith and Football” was rewarded when they received the Queen’s Award for Voluntary Service, the highest award a voluntary group can receive in the UK.
I have the pleasure of seeing quite a lot of Mick at the moment, first because of the JustOne event and second because we are playing golf together!
Quote for the week
A problem not anticipated is a problem. A problem anticipated is an opportunity.
A.L Davis – Owner of Oakland Raiders American Football Team