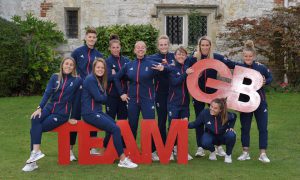 Well it’s been a busy week. The animated film of “Pilgrims Progress” is soon to be released. It is being promoted by “Hatikvah Films” – who are also going to distribute Risen! The Musical DVDs- but more of “Pilgrim’s Progress” next week.
Yesterday saw the launch of the “Just One” event which is to take place at the Portsmouth Guildhall on April 4th and 5th of next year. There will be music from Noel Robinson and the Portsmouth Gospel Choir together with a presentation from the wonderful Evangelist J.J. John. The launch was held in the Portsmouth Cathedral with Noel singing and J. John addressing a packed audience- but more of that later as today I wanted to feature the Team GB Women’s Beach Football Team which is taking part in the World Championships in Qatar with GB playing their first televised game tomorrow at 1.00 pm against Paraguay. They then play the USA on Sunday and Russia on Monday. So why am I featuring this event? Well my wife Caroline and I know two of the Team GB players really well. I taught Gemma Hillier at Crofton School (Gemma now teaches PE at Fareham Academy) and Caroline mentored Hannah Houghton who is now a full time sports coach at Cherbourg Primary.
It is so very rewarding when someone who you have taught goes on to do great things and it just made me think how proud Jesus must have been with what His disciples went on to do after He ascended to heaven. For three years they had listened to His every word, witnessed His miracles and had been amazed at His wisdom, His compassion for others and, of course ultimately the sacrificing of His own life.
Jesus entrusted His disciples to continue to proclaim His message of love and forgiveness and this, of course is what they did, usually at the cost of their own lives. The story of how they do this is in the Acts of the Apostles, which, as I have mentioned previously, is what the Mustard Seed Songs sequel to Risen! is based on. Joffy, our wonderful Musical Director is, at this very moment, putting the finishing touches to phase one of Acts- The Musical Part One – and more of that very soon.