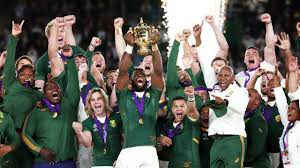 We Can Do Anything from the album Precious performed by Lucy Stimpson-Maynard, recorded and produced by Ross Gill

First, just to let you know that due to popular demand “The Pilgrims Progress” is being shown again at the Vue Cinema, Gun Wharf, Portsmouth at 12.00 noon on Saturday, November 16th.
Following on from my comments last week re the Rugby Union World Cup Final in which South Africa were victorious over England, here is an extract from an article written by England’s Matt Dawson, himself a World Cup winner in 2003. His sentiments reflect mine entirely.
There are millions of dejected England fans all over the world. Ordinarily, there would be no reason to reflect positively on that type of result.
But, looking at the larger picture that South Africa winning that game paints, I do not think any other final has a bigger political story to tell than this one.
You would have to not have any emotion in your body to look at the picture of Siya Kolisi – South Africa’s first black captain – lifting the trophy and not understand the power of what he and his team have done; what he has done as an individual to effectively change the view of millions of people within sport.
Very few leaders in the world get that opportunity and he has just done it by being him and playing rugby. So there are huge positives to the outcome.
The game of rugby means so much to a lot of people, but on reflection the game has much more of a profound effect on a nation like South Africa than it does anywhere else in the world.
Rugby has done an amazing job and that South Africa team will be quite rightly heralded as heroes for more reasons than just winning a rugby game.
It started when the Springboks won in 1995, shortly after apartheid ended, when Nelson Mandela presented Francois Pienaar with the trophy.
But now, 24 years after that breakthrough, we are still talking about the inequalities that South Africans are trying to fix.
Back in 1995 you might have thought maybe within eight or 12 years, could there be a black captain of South Africa challenging for the trophy? It has taken 24 years!
Quote of the week
If you can’t fly, then run, If you can’t run, then walk, If you can’t walk, then crawl, but whatever you do, you have to keep moving forward.
Martin Luther King Jr