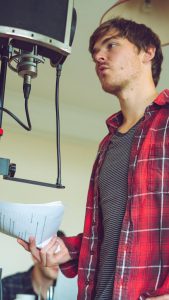 So last week I mentioned how Joffy Girling, our brilliant Musical Director was recording Alex Knox laying down guide vocals for Acts-The Musical. Last blog I also told how I had met Alex.
To explain Acts more fully – for the past four years Joffy and I have been working on the sequel to Risen! The Musical. It started with me singing the basic idea to Joffy and then Alex laid down the guide vocals for all the parts. The next stage was Oscar Batterham, who was at the Guildhall School of Music and Drama with Alex, singing the part of Theophilus. Theophilus was probably Luke’s patron and likely a Roman Official of some standing. Luke addressed his Gospel and the Acts of the Apostles to Theophilus. In our musical we have taken poetic licence with Theophilus being on a journey of faith during which Luke encourages him by describing how the Gospel has spread far and wide by apostles such as Peter and Paul.
Max Panks (Jesus in Risen! The Musical DVD ) was next to be recorded, playing the part of Saul/Paul. Then Katie Forge (Mary wife of Cleopas in Risen! DVD ) sang the part of Mary Magdalene, Nicola Poustie (Mary Magdalene in the Risen! CD) the role of Tabitha, James Townend (Thomas in the Risen! CD) the role of John. Gemma Terry, Chloe Brockenshire and Tim Prestige from Holy Rood church all added more parts before Joffy and I rented an airbnB apartment in Ealing for a weekend to record more members of the London Touring Cast- David Murray (Thomas in the Risen! DVD) sang Stephen the first martyr, Johnny Fitzharris (James in the Risen! DVD) sang Simon the Sorcerer, Andrew Dovaston (John in the Risen! DVD) sang Philip the Evangelist, Casey Lloyd (Cleopas’ friend in the Risen! DVD) sang the crippled man healed by Peter, Jamie Leeke (Simon the Zealot in the Risen! DVD) sang the Ethiopian and Benny Bright (Peter in the Risen! DVD) also added his talents.
The storyline of Part One ended before Paul’s began his missionary journeys. The reason for this was that I was concerned that Part Two would sound like a Paul “travel log.” However I hopefully solved the problem and last week Alex began recording the guide vocals to Part Two – Joffy and Alex are returning early in the New Year to complete the Show. The recording of Part One has been shared with the participating artists and we are hoping for an encouraging response.
The ultimate plan is to film Acts – The Musical as we did Risen! In the meantime it is exciting that Alex and Joffy were so impressed with what we have achieved so far that they suggested we put on a pilot stage production asap – so watch this space!!
Quote of the week
If God is your partner, make your plans BIG!
D.L. Moody