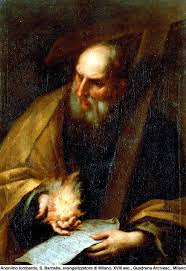 I do hope you all had a wonderful Christmas Day.
So I promised today that I would share with you some information about St Barnabas- who features in the Book of The Acts of the Apostles on which our next musical is based.
According to tradition in 61AD in the city of Salamis in Cyprus, Barnabas was dragged out of a synagogue where he was preaching the Gospel, by Jews who were infuriated by the success of his ministry, and was stoned to death. He had preached with St Paul in the same synagogue at the beginning of their first missionary journey together (Acts 13: 2-5) Barnabas’ death reflects what Jesus said would happen to His followers “They will put you out of the synagogue, in fact the time is coming when anyone who kills you will think they are offering a service to God.” (John 16:2)
Barnabas was a nickname given to him by the apostles. It was a nickname that reflected his character and that essential goodness and integrity that shaped it. His real name was Joseph, in itself symbolic of the man he was. As Joseph in the Old Testament suffered much and became a leader of his people by virtue of his character, so too Joseph the Levite from Cyprus became Barnabas meaning “Son of Encouragement .“ We know few details of the personal life of Barnabas but know much of his character and his good works.
Barnabas served the Lord as prophet and teacher (Acts 13: 1) one through whom God worked miracles (Acts 15:12) and is even called an apostle in Acts 14:14 (chosen by Jesus to be one of the Seventy; according to early Church tradition)
A beautiful summary tells us that that Barnabas was a good man, full of the Holy Spirit and faith (Acts 11:24.)To this we can add many more specific details. The first that we hear of him is that he sold a field and brought the money to the apostles (Acts 4:36-37) There is no indication of a large and pressing financial need in the early Church at this point rather Barnabas’ action “sparkles with spontaneity and joy.” It shows generosity and at the same time humility as he acknowledges the apostles’ authority and submits to it, giving his gift without strings attached for them to use as they think best. It is little wonder that later when someone was needed to carry a financial gift from the Church in Antioch to the famine afflicted believers in Jerusalem, Barnabas was one of those considered trustworthy (Acts 11:27-30) We are also told he earnt his living so as not to be a financial burden to the congregations he was serving (I Corinthians 9:6)
Barnabas retained the humility he showed in those early days, even when years later he was acclaimed by adoring crowds, passionately urging them to worship God instead. (Acts 14:12-18)
I’ll share with you more of Barnabas next week.
Quote of the week
I truly believe that if we keep telling the Christmas story, singing the Christmas songs, and living the Christmas spirit, we can bring joy and happiness and peace to this world.
Norman Vincent Peale