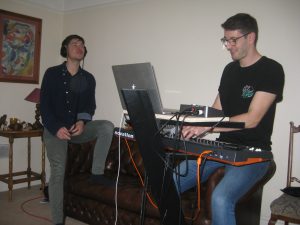 As promised today I am sharing a song from Acts – The Musical in which Barnabas confronts Paul for not wishing to take John Mark with him on Paul’s second missionary journey. (Acts: 15: 36 -41) This is one of the songs that on Sunday Alex Knox and Joffy Girling recorded as guide vocals for our forthcoming musical based on the Acts of the Apostles.
Paul:
I know he is your cousin
And yes that means a lot
But there’s a certain something you may have forgot
He left us to return home and he could do the same
I’m sorry but I can’t trust John Mark again

Barnabas
Yes he is my cousin and yes that means a lot
And no that certain something I have not forgot
Yes I know he left us – but that’s all in the past
So surely we should give him one more chance?