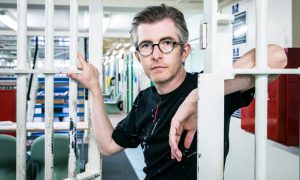 Music is so emotive, indeed transformative- I watched an example of this last week. It was a two episode television broadcast of Gareth Malone attempting to produce a choir in a young offender’s prison. It was extremely moving and I can wholeheartedly recommend you watch both episodes on catch up tv.
I have taken an extract from the Guardian newspaper’s review of The Choir: Aylesbury Prison.

It has been 14 years since Gareth Malone first appeared on our screens. In that time he has coaxed a number of unlikely groups not just to sing, but to perform: teenage boys, residents of the South Oxhey housing estate, some military wives. Now, in The Choir: Aylesbury Prison (BBC Two), he is back to do the same with young offenders.
One might, at this stage, take it as read that he will succeed. Malone, still boyish but now greying and – if you can believe it – 44, has a reputation for not failing at this sort of thing. The formula is reliable and repeatable. But Her Majesty’s Young Offenders Institute Aylesbury is a very particular case.
The 400 inmates, aged between 18 and 21, are doing time for various offences, including drug crimes, robbery, GBH, manslaughter and murder. About a sixth are serving life sentences. Forty per cent are “dealing with some form of mental health problem”. Three months before Malone arrived in June 2019, Aylesbury was placed under special measures owing to high levels of self-harm and violence. Half the prisoners were moved out, and three wings were shut down.
The governor, Laura Sapwell, wants him to start a choir, or something. “I can’t fully see what this will be,” she tells him. But whatever it is, he’s got nine weeks to do it.
The programme quickly becomes an exercise in limiting expectations. Enthusiasm among the residents registers somewhere between low and none. “The mandem don’t tango like that,” says one. Nobody wants to sing, and their musical world is a bit monocultural: everybody listens to drill.
Even when Malone finds interested parties, the logistics of ferrying prisoners around a high security facility makes any kind of assembly next to impossible. Gang rivals are housed in different wings; association across the whole prison is difficult. Malone’s inaugural choir practice is limited to five guys from D-wing. Only three turn up.
Malone, if he feels daunted by all this, hardly shows it. It’s difficult to imagine anyone else wandering through the general population of a prison saying: “Hi! Are you into music at all?” over and over again, as if it is his first day at art school.
And he does, eventually, find people to work with. Rehearsing in small groups or individually, Malone concentrates on song writing, something most of his charges find strangely easy. Dwayne, doing six years for robbery, is particularly talented. “He’s just a bit more open-minded,” said Malone. “He sang. We made music.”
All incarnations of The Choir have some low moments, which serve to make the ending more uplifting. Prison, however, is not designed for uplift; every story is heart breaking. Everybody inside is frightened, depressed and potentially dangerous. One on one, however, they are soft-spoken, insightful and incredibly polite.
The frustrations of working inside are a constant barrier to progress. Malone’s pupils break rules or get into fights and are prevented from meeting him. The prison has some kind of violent incident about once a day – at which point officers just lock Malone behind the nearest door and run off to deal with the situation.
At the point when you would expect things to start finally going right, they get worse. While Malone awaits Dwayne for a rehearsal, Dwayne is badly assaulted and sent to hospital. He’s OK, but he’s done with music, and tired of being told to walk away from fights. “Where is there to walk to?” he says. “I don’t have keys.”
Lewis appears in cell 210, a new arrival. He can – and will – sing, but his mental health is frail. He takes medication for depression and a personality disorder. More often than not he is unable to rehearse. For the first time in the history of The Choir, I am preparing myself for failure.
There is, of course, a reason these things are done in two parts. I don’t think it will spoil the second half if I tell you that Malone perseveres. But on this occasion the success of the choirmaster and his pupils is set against a larger backdrop of failure, of lives wasted, of a system unfit for the task at hand, of a bunch of young men – boys really – with serious mental health issues, confined together, at risk and getting sicker.
In other words: you will cry just like always, but for different reasons. It’s not enough to bite your nails and think: how will Lewis cope with singing in front of an audience in prison? You also have to think: how did someone like Lewis end up in prison?
This is an excellent review and I do I have to admit to finding a tear falling down my face at the finale in part two. One stereotype that the two programmes smashed for me was the belief that young offenders come from bad homes – if you do decide to watch then you will see that this is most definitely not the case and is the main reason for my tear.

Quote of the week.
Don’t worry what others are doing. Do you!
Russell Simmons