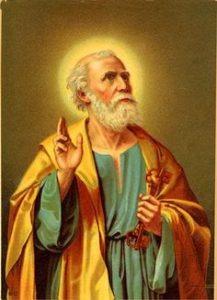 As I have previously explained Mustard Seed Songs are, at present, recording the sequel to Risen! The Musical. It is based on the Bible’s Acts of the Apostles and has a working title of Acts- The Musical. Recently Joffy Girling, our Musical Director and West End actor, Alex Knox finished recording the guide vocals to part two of the musical.
Writing the script for part one was relatively simple as so much happens in the early chapters of the Acts of the Apostles, including the Holy Spirt coming on the Day of Pentecost, the martyrdom of Stephen and the conversion of Saul on the road to Damascus. The later chapters focus on the missionary journeys of Saul (now called Paul) which took me some time to work out how to summarise.
If the main character in the second half of the Acts of the Apostles is Paul then it is Peter who is the main character of the first half.
Here are some interesting facts on St Peter:
Peter was a fisherman in Bethsaida (John 1:44). He was named Simon, son of Jonah or John. The three Synoptic Gospels recount how Peter’s mother-in-law was healed by Jesus at their home in Capernaum (Matthew 8:14–17, Mark 1:29–31, Luke 4:38); this passage clearly depicts Peter as being married. 1 Corinthians 9:5 has also been taken to imply that he was married
In the Synoptic Gospels, Peter (then Simon) was a fisherman along with his brother, Andrew, and the sons of Zebedee, James and John. The Gospel of John also depicts Peter fishing, even after the resurrection of Jesus, in the story of the Catch of 153 fish. In Matthew and Mark, Jesus called Simon and his brother Andrew to be “fishers of men” (Matthew 4:18–19, Mark 1:16–17).
In Luke, Simon Peter owns the boat that Jesus uses to preach to the multitudes who were pressing on him at the shore of Lake Gennesaret (Luke 5:3). Jesus then amazes Simon and his companions James and John (Andrew is not mentioned) by telling them to lower their nets, whereupon they catch a huge number of fish. Immediately after this, they follow him (Luke 5:4–11). The Gospel of John gives a comparable account of “The First Disciples” (John 1:35–42). In John, the readers are told that it was two disciples of John the Baptist (Andrew and an unnamed disciple) who heard John the Baptist announce Jesus as the “Lamb of God” and then followed Jesus. Andrew then went to his brother Simon, saying, “We have found the Messiah”, and then brought Simon to Jesus.
Three of the four gospels – Matthew, Mark and John – recount the story of Jesus walking on water. Matthew additionally describes Peter walking on water for a moment but beginning to sink when his faith wavers (Matthew 14:28–31).
At the beginning of the Last Supper, Jesus washed his disciples’ feet. Peter initially refused to let Jesus wash his feet, but when Jesus threatened him with: “If I wash thee not, thou hast no part with me”, Peter replied: “Lord, not my feet only, but also my hands and my head” (John 13:2–11). The washing of feet is often repeated in the service of worship on Maundy Thursday by some Christian denominations.
The three Synoptic Gospels all mention that, when Jesus was arrested, one of his companions cut off the ear of a servant of the High Priest of Israel (Matthew 26:51, Mark 14:47, Luke 22:50). The Gospel of John also includes this event and names Peter as the swordsman and Malchus as the victim (John 18:10). Luke adds that Jesus touched the ear and miraculously healed it (Luke 22:49–51). This healing of the servant’s ear is the last of the 37 miracles attributed to Jesus in the Bible.
More next week ….
Quote of the week
Worry does not empty tomorrow of its sorrows; it empties today of its strength.
Corrie Ten Boom