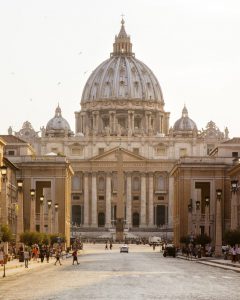 How Can I Love You More? from the album Risen!- The Musical featuring The Original Cast recorded and produced by Joffy Girling

As I explained two weeks ago Mustard Seed Songs are, at present, recording the sequel to Risen! The Musical. It is based on the Bible’s Acts of the Apostles and has a working title of Acts- The Musical. Recently Joffy Girling, our Musical Director and West End actor, Alex Knox finished recording the guide vocals to part two of the musical.
Writing the script for part one was relatively simple as so much happens in the early chapters of the Acts of the Apostles, including the Holy Spirt coming on the Day of Pentecost, the martyrdom of Stephen and the conversion of Saul on the road to Damascus. The later chapters focus on the missionary journeys of Saul (now called Paul) which took me some time to work out how to summarise.
If the main character in the second half of the Acts of the Apostles is Paul then it is Peter who is the main character of the first half.
Here are some more interesting facts on St Peter:
Peter is often depicted in the gospels as spokesman of all the Apostles. John Vidmar, a Catholic scholar, writes: “Catholic scholars agree that Peter had an authority that superseded that of the other apostles. Peter is their spokesman at several events, he conducts the election of Matthias, his opinion in the debate over converting Gentiles was crucial, etc.
Luke the author of the Acts of the Apostles portrays Peter as the central figure within the early Christian community.
Early Church Tradition says that Peter probably died by crucifixion (with arms outstretched) at the time of the Great Fire of Rome in the year 64. This took place three months after the disastrous fire that destroyed Rome for which the emperor (Nero) wished to blame the Christians. Traditionally, Roman authorities sentenced him to death by crucifixion. In accordance with the apocryphal Acts of Peter, he was crucified head down Tradition also locates his burial place where the Basilica of Saint Peter was later built, directly beneath the Basilica’s high altar.
Catholic tradition holds that Peter’s inverted crucifixion occurred in the gardens of Nero, with the burial in Saint Peter’s tomb nearby.
According to Jerome, in his work De Viris Illustribus (A.D. 392), Peter was buried at Rome in the Vatican near the triumphal way where he is venerated by the whole world.
In the early 4th century, the Emperor Constantine I decided to honour Peter with a large basilica. Because the precise location of Peter’s burial was so firmly fixed in the belief of the Christians of Rome, the church to house the basilica had to be erected on a site that was not convenient to construction. The slope of the Vatican Hill had to be excavated, even though the church could much more easily have been built on level ground only slightly to the south. There were also moral and legal issues, such as demolishing a cemetery to make room for the building. The focal point of the Basilica, both in its original form and in its later complete reconstruction, is the altar located over what is said to be the point of Peter’s burial.