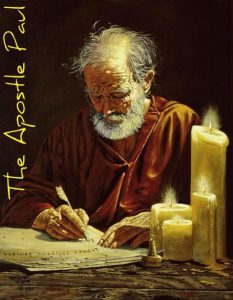 Apart from last week when this blog centred on my mum’s testimony I had been looking at the life of St Peter who is the central figure in the first part of the Bible’s Acts of the Apostles. The second half centres on St Paul who was first called Saul.
In Mustard Seed Songs’ sequel to Risen! The Musical – Acts- The Musical – the second act also centres on Saul/Paul.
So one obvious question is why did Saul’s name change to Paul. I did a bit of research and found:

It has been popularly assumed that Saul’s name was changed when he became a follower of Jesus Christ, but that is not the case. His Jewish name was “Saul” (Hebrew: שָׁאוּל, Modern: Sha’ûl, Tiberian: Šāʼûl), perhaps after the biblical King Saul,] a fellow Benjamite and the first king of Israel. According to the Book of Acts, he was a Roman citizen.] As a Roman citizen, he also bore the Latin name of “Paul” (essentially a Latin transliteration of Saul)—in biblical Greek: Παῦλος (Paulos) and in Latin: Paulus. It was typical for the Jews of that time to have two names: one Hebrew, the other Latin or Greek.
Jesus called him “Saul, Saul” in “the Hebrew tongue” in the book of Acts, when he had the vision which led to his conversion on the Road to Damascus. Later, in a vision to Ananias of Damascus, “the Lord” referred to him as “Saul, of Tarsus”. When Ananias came to restore his sight, he called him “Brother Saul”.
In Acts 13:9, Saul is called “Paul” for the first time on the island of Cyprus—much later than the time of his conversion. The author (Luke) indicates that the names were interchangeable: “Saul, who also is called Paul.” He thereafter refers to him as Paul, apparently Paul’s preference since he is called Paul in all other Bible books where he is mentioned, including those that he authored. Adopting his Roman name was typical of Paul’s missionary style. His method was to put people at their ease and to approach them with his message in a language and style to which they could relate, as in 1 Corinthians 9:19–23.
I do, of course fully appreciate the tremendously difficult times that the whole world is, at present facing. I therefore trust today’s featured song “In Times of Trouble” is appropriate
Also instead of the weekly quote here is a prayer:
Dear God
I pray for healing for all those infected by this deadly virus. Only You can move in a mighty way and do the impossible for them. We pray for all negative outcomes to be resolved by Your healing hands. Bless and cover each and every single person and bring complete healing to their bodies from the top of their heads to the soles of their feet.
Michelle Brown- Kings Church, Southsea