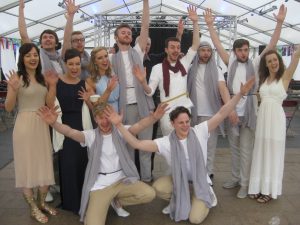 Well the Facebook Risen! The Musical Watch Party took place on Saturday. I messed up the tech and there were three parties going on at the same time- also people kept losing the stream. Nevertheless it was great for the London Touring Cast to reminisce and interact. They joined from all over the world – Jodie Quirke, who played Mary Magdalene, was in Dubai and Max Panks, who played Jesus, was confined to his cabin on a cruise ship anchored off the coast of Florida.
After the Watch Part Darren Bovis Coulter (see blog of October 25th 2018) live streamed the whole of Risen! The Musical. We received some wonderful comments such as “This is the best musical I have ever seen! This made me think of the first performance of Risen! The Musical at the 2015 Coventry Pentecost Festival which Darren had a big part to play in organising. I also reminisced on how this all came about and below have taken an extract from my blog of May 2017
The Risen! CD was mastered by Andrew Bourbon, who was Joffy Girling, our Musical Director’s Lecturer while they were at Birmingham University. Andrew is now a Senior Lecturer at the London College of Music (LCM) which is part of the University of West London based in Ealing. He was so impressed with the show that he told his colleagues in the Performing Arts Department. I met one such colleague, Niamh Mcguckin, who Lectures in Voice (which means singing too) and she too was so impressed that she took it upon herself to form a cast from LCM students and alumni together with fellow professionals. She acquired the use of the LCM facilities (which are amazing) for rehearsals and had 10 rehearsals on Wednesdays and Sundays before the Pentecost production.
So finally, after more than four years of writing, recording and piloting Risen!-The Musical premiered at the Coventry Pentecost Festival on Saturday, May 23rd. It was an unforgettable day; the cast from the London College of Music were absolutely brilliant, not just in their performance but also for being such a great bunch of people to be with. So a huge thanks from me to them for everything that made the day so special – the “flash mob” in the Lower Precinct (our featured video) – Jodie managing a great performance even though poorly sick- the impromptu singing of “Jesus is My Lord” in the Marquee, with that pretty much straight after the cast arrived after a two and a half hour journey. I will never forget the way that “jaws dropped” when people heard Leah sing the opening notes – they obviously had no idea of how good the cast would be but they certainly found out there and then! And of course all the commitment, patience and good humour in rehearsing with such a short time available – oh and I nearly forgot, for helping me drink a few glasses of Prosecco!
Tremendous thanks also for the amazing organisation that took place from the Festival Organisers “Hope for Coventry” – Andrew , Angus, Matthew and of course my great mate Darren- Bovis Coulter. Also to Jo the Manager of Holy Trinity Church’s Prayer House ; some parts of this inspiring building were built in the 15th Century and the cast had the privilege of using it for their changing rooms. Just behind us was Coventry Cathedral, which is so impressive with the new building standing side by the side with the original that was bombed in World War Two.
Biggest thanks, however must go to Niamh McGuckin, our brilliant Director who also played Mary Mother of Jesus. With very little time to rehearse she worked tirelessly to ensure that the production was of the highest possible quality. Her humility was also really apparent when she looked so shocked when the cast presented her with a bouquet of flowers in thanks for all her efforts.
So many people said such kind things about Risen!- The Musical but here is a quote from Andrew – one of the organisers:
“Risen! – The Musical” was a wonderful climax to the Coventry Pentecost Festival -we were treated to an uplifting portrayal of the story of Holy Week to Pentecost through amazing songs, word, action and dance by a highly professional team who conveyed the hope of the Gospel very powerfully. We felt truly blessed and privileged to host the premiere of this inspirational musical and everybody I spoke to was blessed by it. We wish you all God’s blessing in the future, and that “Risen!” will bless many thousands of people in the months to come.
CAST
Jesus – Mikey Wooster
Mary Mother of Jesus – Niamh McCuckin
John- Andrew Dovaston
Mary Magdalene- Jodie Quirke
Peter- Kieran Lawson
Mary sister of Martha and Lazarus – Claire Hutchinson
Thomas- Adam Valentine
Mary wife of Clopas – Leah Godbold
James- Johnny Fitzharris
Cleopas- Benny Bright
Cleopas’ friend- Coby Collins
Judas – Ennio Ficiur
Director and Mary Mother of Jesus: Niamh McCuckin
We are all faced with a series of great opportunities brilliantly disguised as impossible situations.
Chuck Swindoll