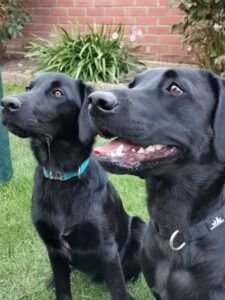 First, I thought I would share the latest photo of our two lovely doggies- Genna, the Labrador and Dylan, the Boarder (Border Collie – Lab cross)
Second, I recently had a thought I would like to share. Many people I know would not regard themselves as Christians or Atheists but Agnostics- i.e. unsure if there is a God or not.
A dictionary definition of Agnosticism is the view that the existence of God, of the divine or the supernatural is unknown or unknowable. Another definition provided is the view that “human reason is incapable of providing sufficient rational grounds to justify either the belief that God exists or the belief that God does not exist.”
So, I tell my friend Joe that I have a friend called Edward Glover who lives at 35 East Street, Gillingham Kent. I then ask Joe if he believes me. Joe can say yes because he has actual evidence that Edward lives there – for example he saw Edward walk through the front door of no 35. Joe could also simply trust me as he knows I would not lie or perhaps Joe could simply reason why would I wish to deceive him.
Joe could also say that, for whatever reasons, he does not believe that Edward lives at no 35. The third alternative is that Joe could adapt a sort of agnostic attitude- I am not sure if Edward lives there – or how can I know if he does? But Edward choosing this option does not take away the fact that either Edward does or doesn’t live at 35 East Street, Gillingham, Kent.
I would like to extend this thought to argue that either God exists or He does not – an agnostic position of “not sure/how can I know” does not detract from the fact that either there is a God or there is not.
This argument could continue to consider the evidence of God existing or not. Evidence for His existence could include how He reveals Himself to us but I am rushing on- my point today is that being an agnostic does not take away the fact that there are only two possible truths to the question “Is there a God? It is either “Yes or “No” – “Don’t know” does not constitute a third possibility.
Quote the week
A little progress each day adds up to big results
Satya Nani.