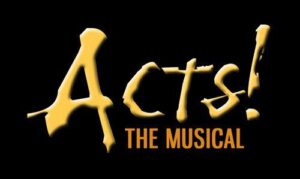 So we at Mustard Seed Songs have been working hard at producing a 20 minute “Showreel” for Acts The Musical. We realised that it could be sometime before we could finance the recording of the whole 2-hour Show or indeed film it – so instead we have focused on giving people a” feel” of what is to come by producing this 20 minute “Showreel.”
We have chosen excerpts that we hope will demonstrate the flavour and variety of the Show plus give an idea of how Acts – The Musical works on two levels 1) telling the story of how the Gospel message was spread as chronicled in the Acts of the Apostles. 2) Using Theophilus, who was probably Luke’s sponsor, as a person on a faith journey, symbolic of someone in the audience.
We have been so fortunate in having two West End actors – Alex Knox and Edward Duly- Baker to play the roles of Luke and Theophilus.
So, this week it is the introduction:
Luke: – Acts 1: 1- 11
Theophilus- Theophilus- – it is your humble servant Luke,
Theophilus:
Luke, my dear friend- it’s been too long – writer of such a wonderful book
Jesus crucified – then risen alive
For forty days appearing as hundreds testified
Theophilus and Luke
Ascended – ascended to heaven
Angels proclaiming, He would return.
He would return again
Luke:
Most excellent Theophilus may I be so bold
There is now so much more of the story to be told
The church has been born – I’ve witnessed it all
How the Gospel has spread allow me to recall
Theophilus –
Luke, I don’t know how to tell you this – I do believe but I just need help with my unbelief.
Luke:
Having a relationship with Jesus is a journey on which we are all at different stages. Please allow me to be your guide – let me share with you the Acts of the Apostles
Quote the week
The best thing about the future is that it comes only one day at a time.
Abraham Lincoln