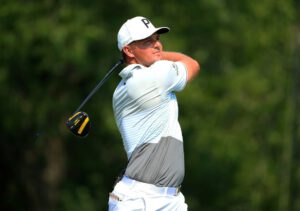 
A Worship Song featuring Lucy Stimpson-Maynard from the album Where Would I Be Without You ? recorded and produced by Ross Gill

Today Joffy our brilliant Musical Director is coming from Bristol to record more of Acts The Musical. So, Nicola Poustie is singing “This is not Heaven” for our forthcoming Showreel. Edward Duly – Baker is singing a new piece of recitative for his role as Theophilus – “But Paul came face to face with the Lord” and Mei- Ling Thomas is singing “I Will Exalt You”.
More of that in future weeks but today I decided to share a little more of Bryson DeChambeau, the 27 year old American who won last weeks US Open Golf Championship. Bryson is changing the face of golf by hitting the ball further than anyone thus making the game little more than drive- pitch and put.
Here is some basic information about him:
Bryson James Aldrich DeChambeau (born September 16, 1993) is an American professional golfer. He has won seven times on the PGA Tour including one major championship, the 2020 U.S. Open. As an amateur, DeChambeau became the fifth player in history to win both the NCAA Division I championship and the U.S. Amateur in the same year. With his U.S. Open victory he became the third player to have won those three championships, after Jack Nicklaus and Tiger Woods, and the sixth player to win both the U.S. Amateur and U.S. Open.
Renowned for his analytical approach to the sport, DeChambeau has acquired the nickname of “The Scientist”. His clubs are specially designed to his specifications, with thicker than normal grips and irons that are all the same length. In 2020, he became the longest driver on the PGA Tour after gaining 40 pounds in weight.
At the 120th U.S. Open at Winged Foot, he came from two strokes behind at the start of the final round to win his first major championship. His 6-under par total gave him a six stroke victory over Matthew Wolff. He was the only player under par in the final round, with a three-under par 67 and the only player to finish under par for the tournament. With the win, he became the third player in history, after Jack Nicklaus and Tiger Woods, to win the NCAA Individual Championship, the U.S. Amateur and the U.S. Open during a career. The win moved him to number 5 in the Official World Golf Ranking, matching his previous best, first achieved in November 2018.
All very interesting (if you are a golf fan) however you may have already guessed why I am featuring Bryson today – yes he is a Christian!
Next week I will share with you his story of faith.