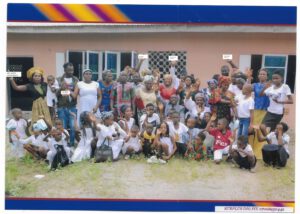 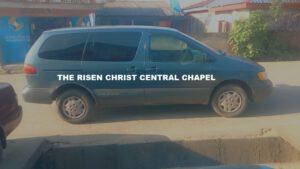 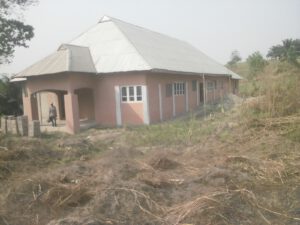 If you have been following this blog for any length of time you will know that a major Mustard Seed Songs’ project has been the construction of The Risen Christ Central Chapel, (R.C.C.C) in Cross River State, Southern Nigeria.
Just to explain again the background to the project:
On the death of his Grandfather (his father had already died) Patrick Oki was about to become Chief of his village in Nigeria. However, the elders wanted him to denounce his Christian faith and return to the native religion which had been practiced before his Grandfather was Chief – this included human sacrifice. When he refused his life was in danger and so he sought asylum in England. It was in Haslar Detention Centre, Gosport that I first met Patrick some twelve years ago. Unfortunately, his asylum claim was rejected and he was deported to Nigeria where he had to re locate a long way from his village to stay safe.

Patrick tells me that when he returned from England, he was ill for two years, not being able to walk or even stand; having been rejected and abandoned by his family and friends- he was left to die, with no one to care for him except his son Emmanuel. Sometimes they had no food to eat, and he even prayed for God to take his life- all this because he had denounced the religious tradition of his people to follow Jesus. Patrick says “I made a vow that if the Lord healed me, I would serve him all the rest of my life and one day the Lord sent a servant – Evangelist Lady Lizbeth who prayerfully joined hands with me and the Lord set me free. Praise the Lord I became born again to the glory of God.”
Patrick is now indeed serving God and is an unpaid Pastor in Cross River State, Southern Nigeria. His congregation, which includes a number of orphans, had been worshiping in a hired hall but Mustard Seed Songs have been fundraising for a number of years and the result is the completed R.C.C.C. (as seen in featured photo)
We have also recently been able to purchase a small minivan to help transport the elderly and infirm to and from from their village to the R.C.C.C. (see featured photo)
The third photograph shows members of the congregation (with Pastor Patrick and his wife seated in the right of middle) with signs thanking those who had sponsored the purchase of the minibus.
Next an electric generator is needed and then a bore hole for water!
Quote of the week
Not all of us can do great things but we can do small things with great love
Mother Teresa