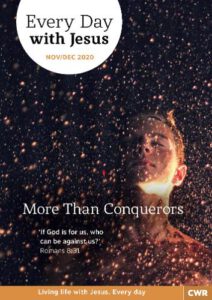 I have been reading “Every Day with Jesus” since I first became a Christian in 1997. On a number of occasions, I had the pleasure of meeting its author, Selwyn Hughes and his words have inspired many Mustard Seed Songs.
Even though Selwyn died in 2006 his “Every Day with Jesus” daily devotions have continued to be published, albeit with some small revisions. Apart from still inspiring song lyrics, I find its pages encouraging and full of wisdom. Here is an extract from Monday’s devotion:
Yesterday we said in the Christian life, hope and resilience are not apart from, but in all things. Living the Jesus way does not bear things in the way of stoicism; nor make you indifferent to things; nor deny the reality of things; nor buckle under things; nor expect to escape from things by trying to earn God’s favour through a performance- based religion; nor become immersed in things as in materialism. Rather, it offers us the possibility of using everything that comes – good, bad or indifferent, as we say – and making the most of it.
We are not blinkered by things or blinded by them. In walking with Jesus there is no escapist mentality, no playing tricks on the universe, no side stepping of any issues. Our spirituality can be shown to be in relationship to things. Those who try to be spiritual by ignoring the real issues of life possibly end up with a pseudo- spirituality. They are so heavenly minded that they are no earthly good.
Quote of the week
Faith does not eliminate questions. But faith knows where to take them
Elisabeth Elliot