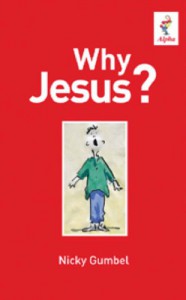 If I Say I Love You Jesus featuring Lucy Stimpson- Maynard from the album Precious recorded and produced by Ross Gill.

So last week I left you with the question “Did I take a leap of faith”?”
So at the start of the Alpha Course I had been given a little red book entitled “Why Jesus?” (as featured in pic) At the end of the book there is a prayer so I knew an opportunity was coming up for me to take that leap of faith and to say this prayer asking Jesus to come into my life. I felt it really difficult to sleep with my two “problems” (see last week’s blog) constantly churning around inside my head. The weekend came when I knew I had to make a decision – as part of the Alpha Course I was at the Holy Rood Vicarage with the Vicar, Michael Christian- Edwards and his lovely wife Merlyn. When the others in my group were having a coffee break, I escaped into the village to go through in my head what I was going to do. On my return sure enough Michael gave everyone the opportunity to say a prayer asking Jesus to forgive us for all the things we had done wrong – to ask Him to come into our lives- and for us to be filled with His Holy Spirit. I remember asking Michael if I could say the prayer twice. He seemed surprised but said that was fine and so that lunchtime on Saturday, February 22nd 1997 I asked Jesus into my life and became a Christian.
Why did I want to say the prayer twice? Well, there was Mr Mill and his dad that I also wanted to be there on such a momentous occasion. So that evening in Mr Mil’s apartment in Titchfield I sat between the two of them confessing out loud all the things I had done wrong and again asking Jesus into my life. Some of the things I had done wrong were pretty big – one had been a real burden for many years but after I had confessed it the burden lifted- I know that sounds amazing and too good to be true, but amazing is what it was and too good not to be true!
So, I thought “micky taking” here you come, but I decided to be pro-active and tell people before they found out through the grapevine. First off was Barry who I had known the longest -he was surprisingly supportive – so too was Ian – but I could not tell Dave, it was Dave who had made the comment about Mick Mellows (see last week’s blog) – he was sure to let me have it with both barrels. A couple of months later Barry and Ian told me that Dave was really upset with me for not telling him. So, I took Dave out for a curry (of course) and felt pretty emotional when Dave told me that he loved me (in a bloke way!!) and that he would always support me in anything I did and that he was upset because it seemed that I did not believe I could trust him. So big apology from me and really all the worries about people “taking the mick” turned out to be groundless- mind you I think my two sons James and Chris took a bit of stick at school.
So did my fears of dying die (sorry for pun) If I am honest not entirely – but I did have God’s promise to hold on to and you can’t have much more than that. In fact, later I wrote a song called “It’s From the Lord” which is on our CD “Heart and Soul” – the last verse of which is “When your time on earth is ending and you look up to Him on high and your see His promises sparkling spelt out in stars across the sky and open arms reach to embrace you to welcome you home then you know, yes you know it is the Lord.”
I also wrote a song which was a sort of autobiography of me becoming a Christian and being worried about what people would think – this one is on the CD “Precious” and is called “If I Say I Love You Jesus.” I did actually once sing it live myself at a Mustard Seed Concert but here it is sung by the fantastic Lucy Stimpson-Maynard.
But I did not start writing Christian songs immediately I became a Christian – that came after a full immersion baptism which I will tell you about next week.
Quote of the week
Hardships often prepare ordinary people for an extraordinary destiny
C.S. Lewis