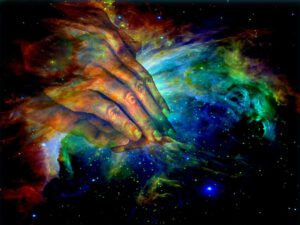 You are the Maker featuring the Mustard Seed Soul Band from the album His Story recorded and produced by Ross Gill.

This week I have another devotion to share from the “Word for Today”
God said in creation, ‘Let the earth bring forth the living creature according to its kind.’ And ‘when God created mankind, he made them in the likeness of God…When Adam had lived 130 years, he had a son in his own likeness’ (Genesis 5:1,3 NIV). In other words, man isn’t just another animal in the evolutionary chain. ‘Microevolution’ teaches variations within species. For example, there are different types of dogs, etc. But there is no scientific evidence to support ‘macroevolution’ – one species evolving into another species. In reference to creation, Dr Derek Prince wrote: ‘I am simple-minded enough to believe that it happened the way the Bible described it. I have been a professor at Britain’s largest university [Cambridge] for nine years. I hold various degrees and academic distinctions, and I feel in many ways I am quite sophisticated intellectually, but I don’t feel in any way intellectually inferior when I say that I believe the Bible record of creation. Prior to believing the Bible I have studied many other attempts to explain man’s origin and found them all unsatisfying and, in many cases self-contradictory. I turned to study the Bible as a professional philosopher – not as a believer – and I commented to myself, “At least it can’t be any sillier than some of the other things I’ve heard,” and to my astonishment, I discovered it had the answer.’
Quote of the week
If God is your partner make your plans BIG!
D.L. Moody