You are my Rock – featuring the Mustard Seed Soul Band with Ross Gill on vocals. Recorded live at a Mustard Seed Concert.

Two weeks ago, I posted a video of Nicky Vujicic, the inspirational guy who was born with no arms or legs (just what he calls his “chicken drumstick” foot) He said something in that video that really touched me – something like “I may not have hands to hold my wife’s hand but if it happens, I can still hold her heart.”
Having re visited the video I realised that there was a part missing from the video I would show those pupils at Crofton School that I was mentoring. It featured Nicky stating that it’s not the end until you have given up. The featured video shows him making this point most dramatically, starting around 4 mins 50 secs.
Also, Nicky has been able to hold the heart of Kanae, his beautiful wife as can be seen in the second of the videos, which also shows his lovely children. 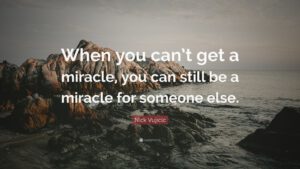