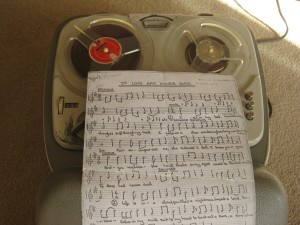 Just out of the loft- first song with Grundig TK24

“Because of Your Grace” featuring Harun Kotch

After I left King Alfred’s College as a fully -fledged PE teacher I wasn’t sure if I really needed to actually go into teaching to earn money as I had this other career bubbling under – that of song writer!
I was convinced that a top star or his/her agent would pay a fortune for “If Love Had Never Died.” or “Affection” or All My Loving” or other songs I had written (made up) such as “We shouldn’t Be Apart” and “Today’s The Day.” Trouble was I could not really go into the office of a recording producer like Cat Stevens had famously once done and just sing “I Love My Dog.” First because I could not sing and second because I did not look as cool as Mr Stevens.
What to do? Well fortunately I discovered that my Grundig TK24 open reel tape recorder had a microphone. I also remembered a kind music student at King Alfred’s College (female) – so I put these two good pieces of fortune together and she (sorry if you are her and are reading this because I can’t remember your name) came up with written musical scores for about five songs. I know you all believe me but just in case you don’t I have braved the cobwebs of my loft to retrieve the original written score of “If Love Had Never Died” a pic of which is attached with the Grundig TK24.
What next? Well I found a record company directory from The New Musical Express and sent off photo copies of the scores to numerous said companies ( I think photo copiers had been invented by then but if not they would have been duplicated by Gestetner en.wikipedia.org/wiki/Gestetner‎‎ or Roneo www.memidex.com/roneo+duplicator‎
So there I was just waiting for the offers to roll in, just working hard on how I was going to spend my millions and what I was going to do with my now redundant teaching qualification. Then the letters came in- each with different words but the same message – not “Yes please we would love Shirley Bassey to sing your fabulous song If Love had Never Died”” or “Barbara Streisand has just told Burt Bacharach to get lost as she has just found a far superior song writer” – no the letters were basically “thanks but no thanks”. Shattered dreams – hopes in tatters – did the record industry not realise what they were missing- perhaps I had sent the songs to the wrong companies – but could 97 companies be wrong?!
Nothing else for it then but to teach!
And that is what I did – first at Whitchurch Secondary (now Testbourne) and then I saw an advertisement for a brand new school in Stubbington – Crofton School. I applied and despite the Head – Mr Boulton at first hating me I got the job because I was in with the PE Inspectors after going on lot of PE courses at Calshot Activity Centre and buying them a few drinks. And what a brilliant move going to Crofton turned out to be!
Mr Boulton did not like me at first because he regarded me as a bit of a “Jack the Lad” bit of a “Del Boy” – looking to do deals even during my job interview- (tried to sell him a second hand minibus cheap! ) However I organised a sponsored stone pick to raise money for the school, not just the PE department – that was the brain wave. The school field could not be used because it was full of flints (the school had just opened on the Marks Road site when I joined as Head of PE in 1975- aged about 12!) So to “kill two birds with one stone” (sorry) the sponsored stone pick raised money but also got rid of the stones. What I did not realise was that in the corner of the school field was a disused road and so people weren’t just bringing in flints they were bringing in lumps of concrete and brick. As sponsorship was by weight some students brought in a fortune – notably Nick Hutton – who apparently was accepting cheques and possibly credit cards (he was ahead of his time) when sponsors did not have enough cash to meet their apparent debts.
Mr Boulton loved this additional money that came into the School’s coffers. When I sensed that this was “the way to win his heart” I organised more fund raising schemes such as a raffle, but not with the first prize being your standard food hamper, oh no first prize was a weekend in Rome and believe it or not the winners went on the weekend that the Pope made his public address from the Vatican window. (I think I may have pretended that I’d had a word with him)
Regardless of the quality of my PE teaching (actually it was not that bad) Mr Boulton decided that he could not do without me (very astute man!) and so he gave me promotion – so much promotion that if I moved to another school I would have to take a reduction in pay- and so I never did move- I stayed and stayed – and loved it!
However I digress from the song writing. Next blog Feb 27th I’ll tell how my love for music resulted in “The Tube” and later “The Heat” discos. In the meantime I have included a song “Because of Your Grace” which is sung by Harun Kotch and produced by ex -Crofton student Ross Gill (more of him later) My old mate Darren Bovis- Coulter gave me the idea for this song and we made it up together. It’s on the Mustard Seed  album “The Season of Singing
which we produced to support a charity to shelter street children in Manila, Philippines run by two friends Craig and Elizabeth Johnson – House of the Heroes www.houseoftheheroes.org

One thought on “Blog Feb 20th “If Love Had Never Died””